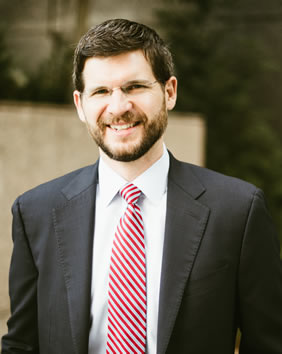 U.S. District Court for the Middle District of Georgia

U.S. District Court for the Southern District of Georgia

U.S. District Court for the District of Massachusetts

U.S. District Court for the Eastern District of Michigan

James Cobb is a trial and appellate lawyer and a founding partner of Caplan Cobb.  James specializes in complex business disputes, federal and state appeals, class actions, and constitutional and tort litigation.

James’s cases have been the subject of news articles all over the country, including in the Atlanta Journal-Constitution, the New York Times, and the Washington Post. James is listed in The Best Lawyers in America for commercial litigation. In addition, American Law Media’s Daily Report named James to its list of the 40 lawyers in Georgia who are “On the Rise”; Martindale-Hubbell gave him its highest rating of AV Preeminent; Georgia Trend magazine named him to its list of Georgia’s Legal Elite; and Super Lawyers magazine named him a Super Lawyer in business litigation.

Before founding Caplan Cobb, James served as a law clerk to the Honorable Jacques L. Wiener, Jr., of the U.S. Court of Appeals for the Fifth Circuit in New Orleans. He also practiced with Rogers & Hardin LLP in Atlanta and Ropes & Gray LLP in Boston.

James and his wife, Gretchen, live in Decatur with their four sons. James is actively involved in the Decatur and Atlanta communities–among other things, he has served on the boards of the Decatur Education Foundation and the Wylde Center, and on the Corporate Leadership Council of the Fernbank Museum of Natural History.

Appeals.  James has a diverse and wide-ranging appellate practice that covers civil and criminal appeals in both state and federal courts. James’s written and oral advocacy has been praised as “excellent,” “outstanding,” of “the highest quality,” and “masterful.” After a recent oral argument before the Supreme Court of Georgia, one lawyer described James’s argument as “quite possibly the finest example of appellate advocacy I’ve heard; it was on par with the best [Supreme Court of the United States] appellate advocate.”  You can watch a video of that argument here.

Constitutional & Tort Litigation.  James regularly represents clients in complex tort and constitutional litigation. His tort experience covers the full range of economic torts, including class actions alleging economic loss, securities actions, and antitrust and RICO actions. James’s constitutional expertise includes both individual constitutional rights and structural constitutional issues, such as the separation of powers and law of democracy. James has served as lead counsel in multiple actions under 42 U.S.C. § 1983 alleging violations of various provisions of the Bill of Rights.

Listed in The Best Lawyers in America for Commercial Litigation

James often represents parties in partnership, joint-venture, and corporate-governance disputes, including the CEO of an international logistics company; partners and officers in a variety of hedge funds and investment companies; and partners in multiple law firms and professional-services firms.

James represents a number of pharmaceutical manufacturers.  Recently, on the eve of a multi-week jury trial for one such manufacturer, James resolved the case for less than 1% of the plaintiff’s claimed damages.

As lead trial counsel for a pharmaceutical manufacturer in a case arising out of a joint venture, James obtained a complete defense verdict.

James is lead defense counsel for a major pharmaceutical manufacturer in civil RICO litigation arising out of the opioid crisis.

As lead counsel for a major vehicle manufacturer in a contract action, James obtained a complete defense judgment following trial.

As lead counsel for the plaintiff in a complex contract dispute, James obtained summary judgment on claims worth more than $6 million.

In a corporate-governance dispute, James obtained—in advance of litigation—a settlement worth just under $50 million.

James recently represented a beverage company in a shareholder-oppression case, obtaining a seven figure settlement that amounted to well more than 100% of the client’s claimed damages.

James was lead counsel for a national bank in defense of legal and equitable claims brought by another national bank. James successfully defeated all of the claims asserted against his client, and he obtained a partial recovery of his client’s attorney’s fees.

James has represented a variety of firms in disputes with local and state governments over the awarding of public contracts. Recently, on behalf of a national technology company, James challenged the award of a multi-million-dollar contract to a competing firm and ultimately negotiated a resolution that awarded a substantial portion of the contract to his client.

James often represents parties in partnership, joint-venture, and corporate-governance disputes, including the CEO of an international logistics company; partners and officers in a variety of hedge funds and investment companies; and partners in multiple law firms and professional-services firms.

James often represents directors, officers, and entities in connection with subpoenas and requests for information by the SEC, the U.S. Department of Justice, and state securities regulators.  James is currently trial counsel for the defendant in an insider-trading case brought by the SEC in federal court.

James recently served as lead trial counsel for a medical-equipment company in defense of claims brought under the federal False Claims Act.

James is lead counsel for a pharmaceutical company in defense of claims arising out of the manufacture and marketing of a generic drug.

James represented a medical-products research company in a complex contract and tort dispute, obtaining a 100% recovery of his client’s claims.  He also recovered a portion of the attorneys’ fees incurred by his client.

James represented Undisclosed LLC—a national podcast with millions of regular listeners—before the Supreme Court of Georgia.  James’s oral argument was described by one lawyer as “quite possibly the finest example of appellate advocacy I’ve heard; it was on par with the best [Supreme Court of the United States] appellate advocate.”  You can watch a video of James’s argument here.

Recently, James successfully argued before the U.S. Court of Appeals for the Eleventh Circuit on an issue of first impression concerning the subject-matter jurisdiction of the federal courts. In a published opinion, the court agreed with James’s arguments, holding that jurisdiction did exist.

James represented a Fortune 100 telecommunications company in a federal appeal of an order certifying a nationwide class in a business dispute.

James represents companies and their officers, directors, and employees in investigations and enforcement proceedings by federal and state securities regulators, including the Securities & Exchange Commission and the Financial Industry Regulatory Authority.  James recently served as lead defense counsel in a civil action brought by the SEC alleging insider trading.

James represented a major brokerage firm in a week-long securities-fraud arbitration. Following the trial, the arbitration panel returned a unanimous judgment in favor of the brokerage firm, rejecting all of the claimant’s claims.

On behalf of an Atlanta-based securities underwriter, James obtained an early dismissal of an action in the U.S. District Court for the Southern District of New York. Of the approximately 30 defendants in the action who filed motions to dismiss, James’s client was the only one to be dismissed from the action without having to engage in any discovery and without having to pay anything in settlement.

James is lead counsel for a state licensing board in two federal antitrust actions raising novel issues of state-action immunity.

James currently serves as lead defense counsel for one of the largest pharmaceutical manufacturers in the world in civil RICO litigation arising out of the opioid crisis.

On behalf of a construction firm, James successfully litigated RICO claims arising out of a publicly financed airport construction project. James not only obtained a 100% recovery of the client’s claims—he also obtained a recovery of attorneys’ fees.

James has represented multiple securities underwriters and broker-dealers in RICO actions involving a variety of issues, including offerings of mortgage-backed securities and short sales of securities.

James represented one of the country’s largest manufacturers of building and paper products in multiple product-liability class actions in federal courts all over the country.

James recently represented a class of public retirees in a federal class action over retirement health benefits. That case settled for over $14.5 million in cash and benefits to the class members.

James represented a publicly traded fuel retailer in multiple consumer class actions concerning the manner in which motor fuel is sold at retail.

On behalf of a large privately held company, James recently conducted an internal investigation into widespread employee fraud and theft.

James represented a special committee of the board of directors of a publicly traded telecommunications company in an internal investigation into the backdating of stock options.

James recently served as lead counsel in voting-rights litigation challenging the system by which the state of Georgia processed and reviewed voting applications.  The litigation ultimately resulted in a settlement that restored the voting rights of over 50,000 Georgians.

Twice, the U.S. District Court for the Northern District of Georgia has appointed James to act as trial counsel to litigate a pro se plaintiff’s federal civil-rights claims. In both cases, James obtained a very favorable result for the client.

Master in the Lamar Inn of Court, Emory University School of Law

Former Chancellor of the Episcopal Church of the Epiphany, Decatur, Georgia

The Accountant-Client Privilege, presented at the Georgia Society of CPAs annual seminar on Fraud & Forensic Accounting (2018)

Panelist for Professionalism in the Appellate Courts, presented at ICLE’s 2015 Seminar on Appellate Practice

Recent Developments in the Law of Arbitration, presented at ICLE’s 2014 Seminar on Contract Litigation

Panelist for Jurisdiction and the Stream of Commerce: Drying Up or Preparing to Flood, presented to the Lumpkin Inn of Court (2012)

Developments in Antitrust Law at the U.S. Supreme Court, presented at Antitrust Law: The Basics and Healthcare (Institute of Continuing Legal Education in Georgia, 2011)

Courts and Secrecy, presented to the Lamar Inn of Court (2011)

10 Recent Developments You Should Know About Georgia’s Law of Evidence, Institute for Continuing Legal Education in Georgia (2016) (with T. Brandon Waddell)

Contributing Author to Handbook on the Scope of Antitrust (American Bar Association, 2014)

Recent Developments in the Law of Arbitration, Institute for Continuing Legal Education in Georgia (2014) (with T. Brandon Waddell)

By “Complicated and Indirect” Means: Congressional Defense of Statutes and the Separation of Powers, 73 Geo. Wash. L. Rev. 205 (2004)